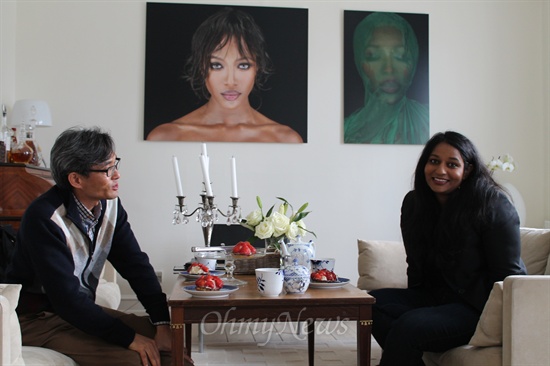 ▲ Interview with Sharmi: She prepared a delicious strawbery cake in a neat room of a 2-story white house.


How can a happy life and a happy society be possible? There is a woman who is trying to find the answer by waling a miles in the shoes of the Danish. American Sharmi Albrechtsen, in her late 30s, lives in Copenhagen with her Danish husband studying why Denmark is one of the happiest countries in the world.

I visited a wealthy village outside of Copenhagen to interview her. She is hosting me with a delicious strawbery cake in the living room of a 2-story white mansion house. She has been living in Denmark for 12 years, and writing essays on her blog for 3 years about the secret of happy Danes. She wants to publish a book about it in the near future. Why is she so dedicated to the question? She said ,"Because I was so unhappy."

"Around 2009, there were some reports that Denmark was the happiest country in the world. The funny thing is, at that time I was getting divorced from my Danish husband. I was very unhappy, so I wanted to know much more about why they are happy. But no one has explained this. So I started my blog to find the answer."

Sharmi said, "I don't belong to one country. I'm a global citizen."

"My parents are from India originally but I was born in Canada, grew up in the U.S. from 1 to 25 years of age. I married an American man but divorced. And secondly married a Danish man, with him I ended up in Denmark. But divorced again. Now I am living with my third husband, who is also Danish. So I'm a kind of mixed person."

She said, "Part of the reason that we had a divorce with my second husband was because I didn't really accept the Danish culture."

"I was a foreigner in a foreign country. And I didn't understand what makes Danish people happy. I was trying to be an American in Denmark. And it doesn't work. So I made myself very unhappy."

Why does American style not work in Denmark?

"Because most Americans are very materialistic, they believe that success is your money, that happiness can be bought, that if you are a successful person then you have a nice car, a big house, etc. Danes don't feel like that. They're actually against materialism. I had so many Louis Vuitton bags and no Danes said 'nice bag' to me because that's not what they value. That's where I went wrong, really. During my marriage, I spent a lot of time spending money. I spent and I bought and I bought… trying to make myself happy. And it didn't happen. And then I ended up divorced."

She said there are big differences in terms of values between Denmark and America.

The combination of system and attitude 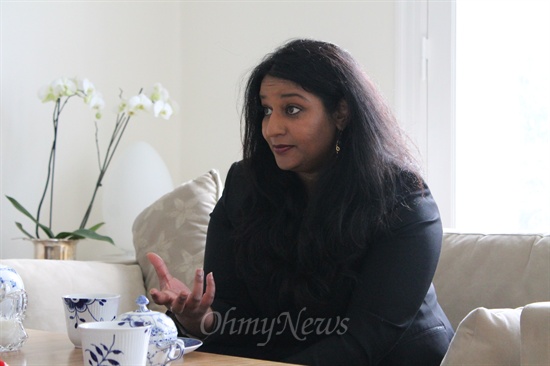 ▲ So if you could say in one word, what is the secret to happiness among Danes? "Equality. I think it goes across everything.

Then how are they able to relax and not obsess over being the best?

- Does it come from the secure system of Danish society or unique characteristics of Danes?

"I think it's the balance of both."

The combination of system and attitude. Sharmi said the Danish tax system, which has one of the highest rates in the world and is able to make secure welfare system, is related to the Danish characteristics, humility and equality.

"The tax system heavily taxes people who are successful and brings up the people who are poor. So you create this big middle class. Everybody's almost middle class. Of course you have some very few very wealthy people, but the poor people in Denmark are as happy as the wealthy people in Denmark. And that's not the case in the U.S. If you're poor in the U.S., you are very unhappy."

But Sharmi said the well-made system cannot explain all of the secrets of happy Danes.

"Many European countries, like Germany, have the same free healthcare and good welfare system, they have everything. I was interviewed by a German journalist and asked, 'Why is Denmark so happy? Why aren't the Germans just as happy?' I believe it's more of the attitude, the mental attitude that we're all the same. What makes people unhappy is envy that oh my neighbor, she has a bigger house than I do, or my friend, she got into a better university and I didn't. You don't have that in Denmark. Here, instead of making people happy, first you remove what makes people unhappy."

The Jante Law and so-called Hygee

Sharmi said that kind of attitude rooted from the Danish word "Janteloven", the Jante Law, which has existed as unwritten rules of Danish community for a long time. It has ten rules, which include these:

1. Don't think that you are special.

4. Don't fancy yourself as being better than us.

9. Don't think that any one of us cares about you.

10. Don't think that you can teach us anything.

Sharmi said "the whole idea of Jante Law is that we're all equal, and it is related to the Danish tax system". It means system and attitude influence each other.

- You have lived in this country for 12 years. So if you could say in one word, what is the secret to happiness among Danes?

"Equality. I think it goes across everything. Because if everybody's the same, if we're all equal, we don't have people who are trying to take from you or trying to steal from you. You don't create this unhappiness and envy. Equality with my doctor. His name is not doctor. His name is his first name. I actually call my doctor a doctor and he's always surprised by that. Even the policeman. In the U.S. he would be officer. There's no officer name here. They would just be like, Hey, you."

Sharmi said this equality is combined with another cultural tradition, so-called Hygee, which can be explained as "being together comfortably", and it makes happy Danes.  "It's so dark here in the winter and we have so little light. Then why and how would anyone be happy? One thing comes from Hygge. It's a mental attitude of being cozy, being comfortable. Because it's so dark, you're always creating candlelight and cozy relaxing comfortable situation where people can sit together and have some cake and some coffee and some wine and they talk together. She said that is something that everyone can do. If you're the poorest person in the Denmark, you can buy some candles and some cake and some coffee and have hygge. And the richest person in Denmark can do the same thing. And they have the same kind of happiness. I think hygge is a very interesting concept because it's a very big equalizer."

Equality does not suppress but guarantees individual's choice 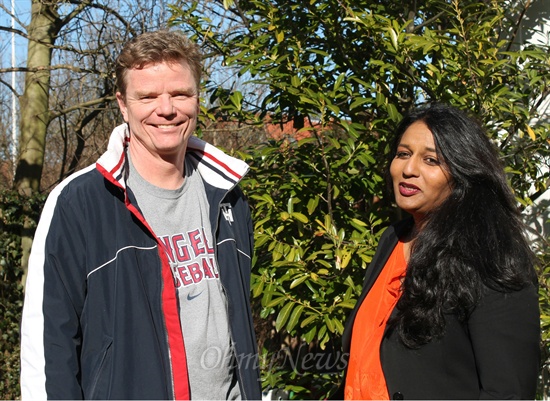 ▲ Sharmi's husband said "We Danes are living without consciousness about happiness. If Sharmi's book is published it should be a textbook for every school in Denmark."


By the way, doesn't the culture of equality such as Jante Law and the Hygee suppress the freedom of individuals? Sharmi said "no". Because equality means respecting each other, it is much more able to guarantee the individual's choice.

"If you want to get divorced, it's okay to get divorced. I have been married three times and it's totally fine here. It's very normal. But in the U.S., you may feel pressure. 'Oh you've been married so many times and two divorces, how awful!' Here the individual counts for everything. That's essential. There's not a lot of pressure from others."

Sharmi said it can give answer to why high divorce rate in Denmark can not reduce the happiness index.

"The divorce rate here is very high, almost 40%. And studies show that 67% of 2nd, 73% of 3rd marriages fail as well. Even though the happiness index is one of the highest in the world. It may be because they are not pressured by others. They choose and enjoy their life."

During the 2-hour interview with Sharmi, her third husband, who is Danish, came back home from shopping. He is a high-ranking manger of a middle-sized company. Laughing, he said, "We Danes are living without consciousness about happiness. If Sharmi's book is published it should be a textbook for every school in Denmark. It contains interesting stories even I don't know."
#HAPPINESS #SHARMI ALBRECHTSEN #DENMARK
댓글0
이 기사가 마음에 드시나요? 좋은기사 원고료로 응원하세요
원고료로 응원하기